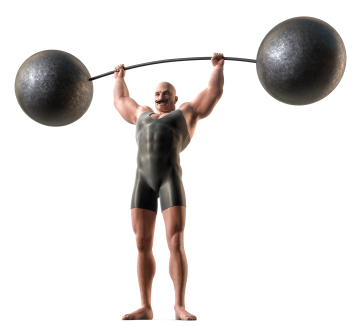 There’s an older guy at my gym. He’s one of those weight lifters from a bygone era who would probably bench press me into the wall if he heard himself referred to as someone from a bygone era. He’s there at the same time every day, working out with his weight belt, gloves and weights carefully organized around him.

I never really noticed him at first except in the brief moment passing by on my way from the treadmill to the small weight room off the main gym. I generally steered clear of the scene in the main gym, preferring weight-lifting in private. But as always happens in life, things change and one morning I came in to discover that my private little weight room was no longer. The personal trainers had snatched it up, leaving me the choice of either working out on the women’s only side with the ear splitting techno beat (no wonder they got rid of the aquarium – those poor fish!) or insert myself into the mainly male territory of the larger gym. I chose the latter.Deferentially, or so I hoped, I claimed a small patch of territory on the opposite side of the room from the older weight lifter, partially hidden by a pillar. As I stood doing 10 lb arm curls near the mirror (have to keep an eye on my posture, and yes, I was checking out my bicepts) I felt really conspicuous to be pumping iron alongside the grunting and heaving men folk (yes, they really were grunting and heaving). It was as though I’d snuck into some kind of a masculine secret society and it was just a matter of time before I was discovered and booted back to the women’s only side. So far this hasn’t happened.

One morning shortly after I’d immigrated to the mainly male gym, I witnessed something that jolted the older guy rudely onto my radar. I was minding my own business, doing bench presses or some damn thing, when he walked over not far from where I was working out, picked up an errant exercise ball (they NEVER stay where you put them) and hurled it across the room in what I took to be quite an aggressive manner. I literally stopped mid-set for a beat or two before catching myself and quickly ducking my face to hide my surprise. It took about 2 seconds to concoct a reason for this curious behaviour. The guy was a jerk.

From that moment on, I behaved how one behaves around a jerk. I averted my eyes, kept to myself and just prayed I wouldn’t get in his way.

I’m embarrassed to admit that while he never hurled another exercise ball or did anything else even remotely resembling jerkyness, it was interesting the way my judgment of his character took root. I felt edgy when he was around, and I started trying to get to the gym earlier so I could finish before he arrived. I tried to make it very obvious when I was putting equipment away after finishing with it. I didn’t want this one-man Gestapo squad to take issue with me. I christened him “Papa Smurf” in my mind because he had a big bushy white beard, was somewhat short and stout like Papa Smurf, but mostly because it made me feel a bit better. I maligned him fairly consistently to my partner in those never ending, never completed conversations we would have driving to and from the gym. The conversations that sometimes, but not always, downgraded into one of those ‘all men at the gym . . .’ vents. Not particularly proud of this, but . . .

Then one day, something happened. In the midst of sharing my judgments with a friend who also goes to my gym – oh who am I kidding, I was bitching, plain and simple – my assumption that she would chime in at any moment and say something like “I know what you mean. He’s very unfriendly” never came to pass. Instead, she knocked me off the rails by talking about how caring and helpful he’d been to her in the past, even going so far as to offer weight lifting training if she was interested. I couldn’t believe we were talking about the same person and I sat there grasping for evidence to support my story and feeling quite frustrated for a few moments.

But then in one fell swoop, I got it. I saw what I’d been doing. I’d projected a whole, complex, but utterly fictitious storyline onto this poor guy. Based on one incident, I’d lumped him so completely into a box that I had been literally incapable of seeing him as anything but an asshole. And once he was in the box, I simply responded accordingly.

Suddenly though I felt excited as one does when they let the people around them out of their boxes. Excited and curious to see who he really was. And right then and there, I vowed to smile and say “good morning” to him at the next opportunity.

You can guess what happened, right? Of course he turned out to be so much more than the box I’d put him in and most mornings when I see him now, we smile and acknowledge one another with a word or two. No, I don’t have him and his wife over for dinner, and I doubt that I ever will, but he has been thoroughly recast in the projection room of my mind and I’m enjoying my time at the gym infinitely more this way. I have no idea what was up for him on the morning of the exercise ball incident, but that doesn’t seem to matter anymore. Now all I notice is that he seems to have really kind eyes. How did I miss that before?