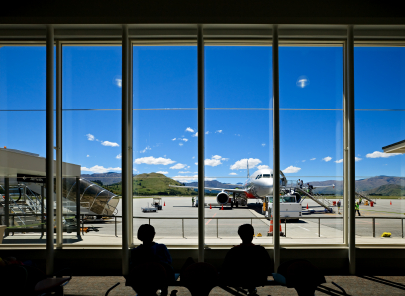 I was sitting in the Alaska Airlines lounge at SeaTac the other day. I had about 4 hours to kill between flights and while I’m not a member of the club or anything even remotely resembling a frequent flyer these days, I sucked up the $45 daily fee Alaska charges the general public and went in. It’s a nice lounge. 2 levels. Lots of big windows. All you can eat food and drinks. Airplanes taking off against the snow-covered Puget Sound mountains to the west. Very nice.

Now while I probably appeared pretty cool, calm and collected on the outside, standing there at the front counter paying my fee and checking my flight status, I could feel myself tightening up a little and becoming a bit stiffer than I’d been seconds earlier strolling freely down the airport concourse. I wasn’t as articulate as I normally am either, and for a second, I struggled to ask the woman behind the counter a very simple question about flight announcements. The words stuck in my throat like a lump of old bread and she stared intently at me, her head slightly cocked like a dog trying to make sense of a strange sound. People were coming and going around us and I suddenly felt like an ass.

This weird phenomenon always seems to happen to me whenever I go somewhere that feels kind of exclusive or where I imagine the 1% must hang out. My gremlins (inner critics) suddenly have plenty to say about how I should look, act and feel, barking out orders in sharp staccato. “Speak louder.” “Stand taller.” “Be more assertive.” “Don’t just stand there!” Meanwhile, they tell me, everyone else is free and at ease in this environment. It is me, they assure me, that doesn’t belong. And like the movie where the down on their luck character is having dinner in a fancy restaurant for the first time and facing a very complicated table setting, I have absolutely no idea which fork to use. (Yes, thank you. I know. Start from the outside and work in. I saw “Pretty Woman” too).

After signing my credit card receipt, I stepped back from the counter to collect my bags. The receptionist had already turned to talk to someone else, her tone slightly deferential. I was pretty sure I hadn’t noticed any deference in her tone when she was speaking to me two minutes earlier. I turned to climb the wide stone stairway to the upstairs lounge, emerging into a bright, sunlit room dotted with seating areas tucked around fire places, TV’s and facing the open windows. It was about half full of casually well-dressed people sitting around eating breakfast and looking completely at ease.

I dropped my bags in a couple of chairs by the window and sat down feeling awkward and a bit out of place. I glanced nervously around the room, and a few people glanced back. I wondered if they thought I looked like I didn’t belong. I tried to reassure myself with the thought that these days, you can’t tell who has money.

For the next few hours, people came and went, some people stayed as long as I did and some people started cocktail hour well before noon (did I mention the open bar?) By this point, I had moved to a little out of the way alcove, reading emails, planning my travel schedule, munching on pre-lunch appetizers and watching DVDs.

From where I sat, I had a great vantage point of the comings and goings and I looked up as a middle-aged couple emerged at the top of the stairs. They were both well dressed in that understated way, sporting matching luggage and the healthy glow of a couple of weeks playing tennis or golf in the desert. As they paused, I took advantage of my semi-hidden position to scrutinize them more thoroughly (because if we’re being honest here, that’s what we love to do, right? Watch people who don’t know they’re being watched).

Their dress and manner fit right in here and I assumed airline lounges were ‘old hat.’ But despite the regal way she paused at the top of the stairs, her darting eyes revealed just the faintest trace of panic. Even her husband, with his strong profile and expensive watch looked for one split second like a gangly teenage boy as he bumped sharply into his wife, failing to notice that she’d paused in front of him. They both stood there for just a split second searching the room like they had absolutely no idea what to do next. But moments later, they were off, moved rapidly over to some chairs nearby and the speed with which they sat down made me think of a game of musical chairs, except without the music.

As the man efficiently stowed their luggage nearby, the woman began applying lipstick and touching her hair in a way that gave me the impression of a bird smoothing its ruffled feathers. The awkwardness from moments earlier was all but gone, making me wonder whether I’d actually seen it in the first place.

But I had seen it and suddenly I realized that my earlier gremlin ass-kicking hadn’t been some freakish phenomenon that I had been singled out for. In one fell swoop, I realized that no one, not even an affluent, attractive and well-dressed couple is immune to gremlins. The only difference between us is our skill in covering that up. And judging by the exceedingly small window of awkwardness I’d witnessed in this couple, they were very skilled. In fact, if there were an Olympic Pairs Persona category, this couple would own the podium.

I know all this stuff intellectually. Ask me any time if I think everyone wrestles with insecurity, and I’d say yes without hesitation. I know we do. Yet earlier, when I’d been standing in the reception area, the doubts and fears about not belonging were too loud and my intellect couldn’t get a word in edgewise.

Seeing insecurity in people I would never have suspected of being insecure came in pretty handy that day. It snapped me out of my doubts and drove home the fact that discomfort is a hell of an equalizing experience.

Smiling to myself, I looked around the lounge with fresh eyes, suddenly feeling like I was in a room of peers, united by our silly, awkward games of trying so hard to look good.